Don’t Do Summer without Sunscreen! 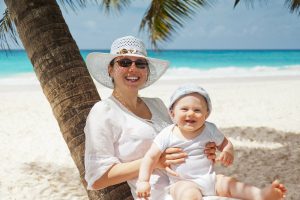 Long sleeves, hats and plenty of shade are great for preventing sunburn, but don’t skip the sunscreen! It’s still one of the best ways to protect yourself from too much sun exposure. There’s no need to avoid swimming or any kind of outdoor fun when safe and effective sunscreen formulas can be used daily.

It’s a fact that most skin cancers are caused by unprotected exposure to the sun’s harmful rays. It’s also a fact that sunscreen is a simple, safe way to block those rays. Study after scientific study has shown that not only is there no risk in using sunscreen as directed, but it reduces your risk of skin damage and all types of skin cancer. A few ingredients like retinyl palmitate, oxybenzone and nanoparticles are sometimes cited as potential risks, usually in alternative news sources, but the facts don’t support those claims.

Retinyl palmitate might sound intimidating, but it’s merely a form of Vitamin A that occurs naturally in your own skin. It’s an ingredient in sunscreen because its application helps prevent premature aging that’s caused by damaging ultraviolet (UV) rays. Studies have found no increase in cancer risk from retinyl palmitate. Retinoids, another form of Vitamin A, are actually used to help prevent skin cancer in some people at high risk for the disease.

Another substance that’s often mentioned is oxybenzone, an ingredient that’s been FDA-approved for almost 40 years. An old study that has convinced some people that oxybenzone is dangerous involved massive doses of it fed to young mice. Eventually, it altered their hormone levels. While that might sound scary, it’s important to understand that it would take at least 277 years for one person to be exposed to that much of the ingredient with daily use. Modern studies show no evidence it causes any type of health or hormonal problems in humans when used in sunscreen.

Barrier sunscreens like zinc oxide and titanium dioxide have been used for decades, and usually leave a coating on the skin that blocks the sun’s rays. But with nanotechnology, the tiny nanoparticles have been made small enough that they don’t leave a visible residue. They still block dangerous UV and UB rays just as well, and go no further into the skin that the outermost layer.

For the best protection, choose a broad-spectrum, water-resistant formula with an SPF rating of at least 30 or higher reapplied every two hours. Reapply more often when sweating or swimming. Spray formulas are convenient, but don’t forget to rub them in to get complete coverage. You can easily avoid inhaling sunscreen or getting it in your eyes or mouth by spraying it into your hand first and then applying to face and neck.

Sunscreen is proven to help prevent the sun damage that causes both premature aging and skin cancer. Don’t let myths and misinformation about its effectiveness and safety keep you from protecting yourself and your family.

Learn how to apply sunscreen correctly for maximum benefit:

The Best Sunscreens for Your Face In "Esthetician Blog"
Suncreen Recall: What You Need to Know In "News"
Previous post
June Product Special: Lytera Skin Brightening Complex
Next post
Congratulations to Our 2016 Top Doctors

You will always see a doctor.